Everything You Need To Know About Best Golf Clubs 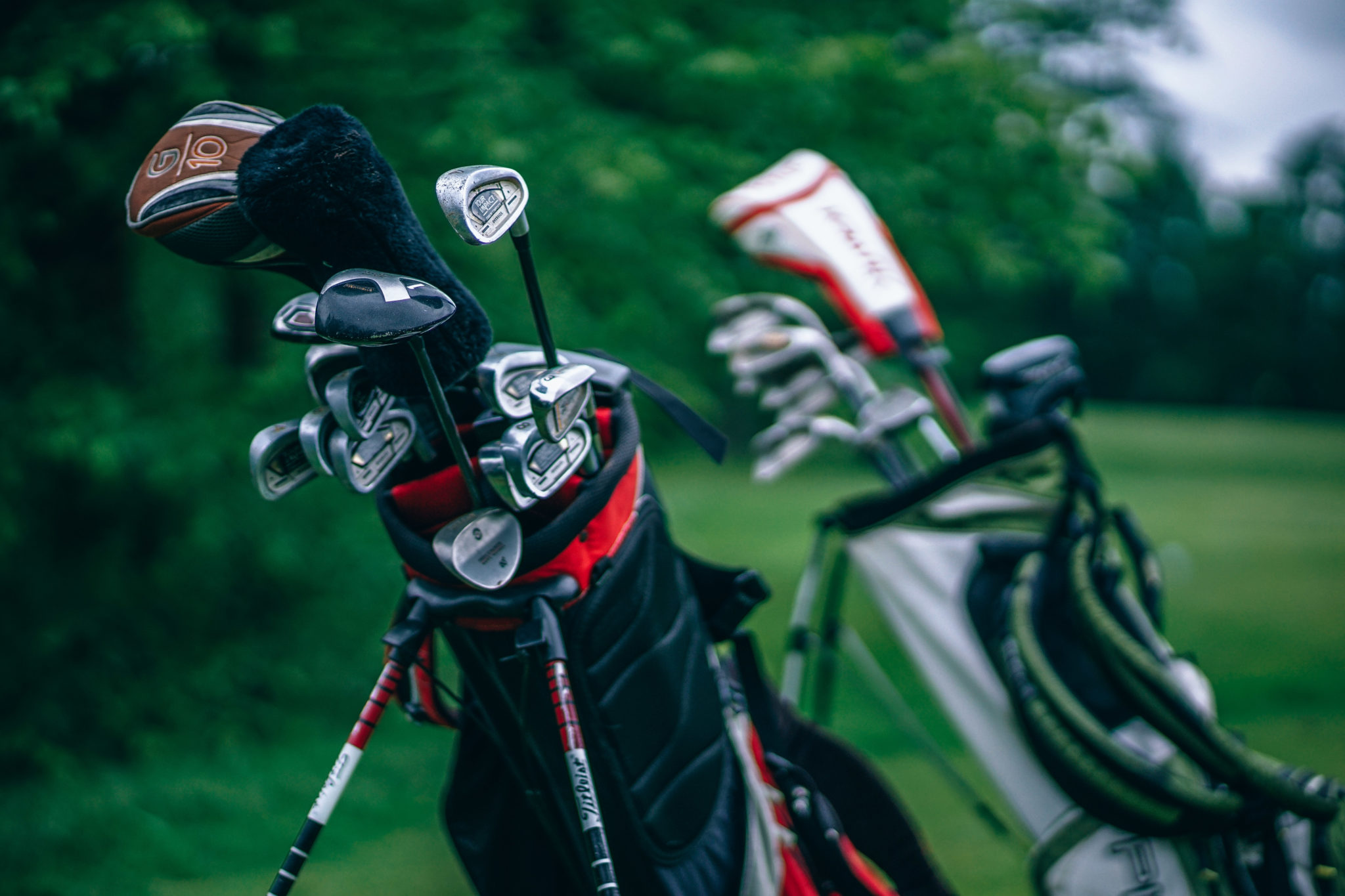 Everything You Need To Know About Best Golf Clubs

by Milan Novakovic
in Road
Comments

Whether golf is an extreme sport is arguable, but golf and extreme sports have one thing in common for sure – and that’s the equipment and the importance of it. For that reason, if you are a golf enthusiast and know little about the essentials of the sport, then allow us to introduce you to the best golf clubs and several different types in a typical golfer’s bag. After covering the golfer’s arsenal, we are going to discuss a golf club that best fits your needs to help you make the best choice upon purchase. Let’s dive in.

The Basics of Golf Clubs

Before delving into the types of various golf clubs, a golf newbie needs to know the basics and rules of the sport, hence the golf clubs. So, golf clubs are the instruments that we use to strike the golf ball. A golf club consists of three main components – the Head, the Shaft and the Grip. Because of the rules of golf that constrain the design of golf clubs, it is the clubmakers’ goal to produce an effective golf club that will not fall short of providing a long, accurate, and forgiving shot. This means that the club’s elements are designed in a way to minimize the effects of poor swings and poor contact.

A modern set of golf clubs usually comes with seven irons (4, 5, 6, 7, 8, 9, and PW), three woods (the 1-driver, 3, and 5), at least 1 hybrid (3H), and a putter – twelve clubs in total. You are allowed to carry fourteen clubs in your bag according to the golf rules, but many golfers add another specialty hybrid or wedge.

Despite all that, it comes without saying that the more golf clubs you carry in your toolbox, the more options you have throughout the actual play. Nonetheless, rest assured that you won’t become a better golfer just because you have the best golf clubs. It’s about balance – skill is as important as equipment. 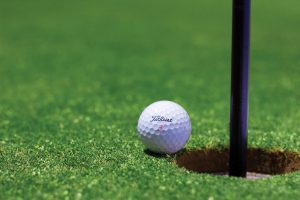 This category of golf clubs also known as “woods” includes the driver and the fairway woods. Though still being referred to as “woods”, their club heads are no longer made of wood. This type of golf clubs have the largest heads and with the longest shafts. Both of these are long-range weapons in the golfer’s arsenal, however, what makes them different is the fact that the former is used to drive the golf ball off of the tee, whereas the latter can be used to hit long shots on the fairway without the need for a tee.

Irons are the most numerous clubs in the golfer’s arsenal, typically ranging from 3-iron through 9-iron or pitching edge. Unlike the woods that have the rounded back edge, these come with a comparatively flat, metal head, leading to one of their nicknames “blades”. Most of these come with solid heads, even though some are hollow. Moreover, irons have angled faces, also called loft, etched with grooves that help grip the golf ball and impart spin. This category of golf clubs is mostly used on short holes or for tee shots. 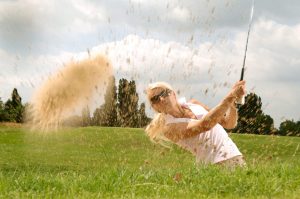 Thanks to a recent development in the sport, there has been an appearance of a new category of golf clubs – hybrids. Hybrid clubs became mainstream only around the turn of the 21st century. Basically, these are a combination of a fairway wood head and an iron length shaft, hence the name “hybrid”. The long irons have been traditionally known for being the most difficult to hit. So, the idea behind the hybrids is to give the golf player a more forgiving option in comparison to long irons. Conclusively, most hybrids will perform better when taking distance and forgiveness into consideration.

Wedges are the category with even an even greater loft compared to the short irons – often more than 50 degrees. Wedges are regarded as very useful to your because of their design. They are also called “blade clubs” because you are close enough to the green that the design elements that have been improved in the meantime such as wide soles are less important. In the past few years, values such as shot shaping and increased shot control, which blade design encourages, is playing a more important role when it comes to a good wedge design.

Putters are golf clubs with a special purpose – hitting the ball into the hole. They have a loft of less than 10 degrees because of their primary purpose – to be used to hit ground balls on the green. Most putters have the shorters shaft of any club, however, a recent development in golf equipment made possible for the invention of the long-shaft putter. The goal of this technology is to allow the golfer to lay the club onto his chest to gain extra control over the putter.

The Combination of Best Golf Clubs and The Psychology Behind It 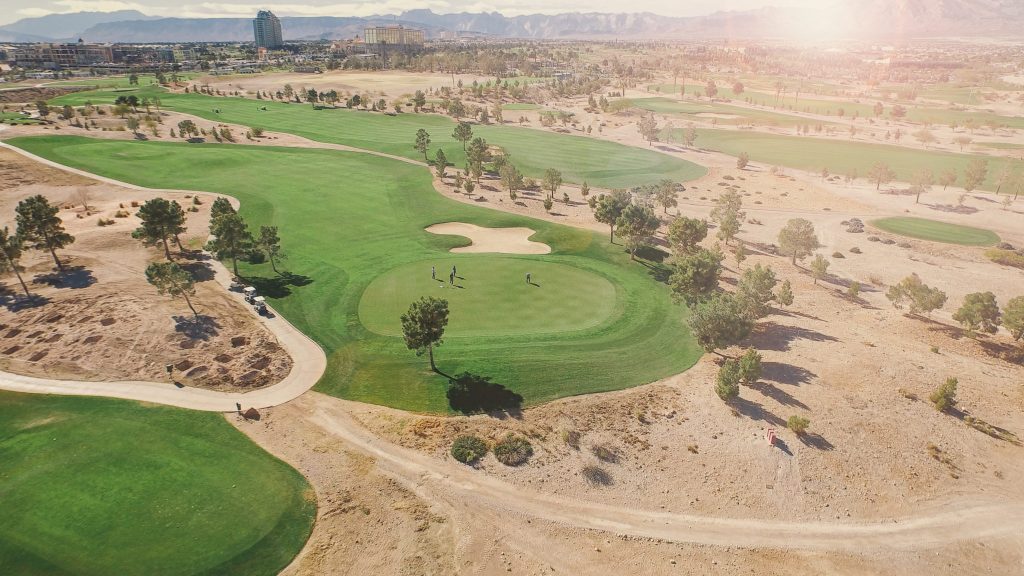 Many golf club manufacturing businesses have been struggling with getting into a golfer’s mind. In the past, the trends have been varying, but the results they have come up with in the recent years suggest that an increasing number of golfers are willing to invest more money in golf equipment. They found that even mediocre players think that high-quality equipment from top brands such as Galvin Green can help them with getting to know the sport and learning how to actually play it.

This also suggests how important it is to find the best golf clubs for you and your golf needs. After years of experience in this field, we have found that many golfers have as their minimum arsenal several drivers, one set of irons, one or two hybrids, multiple wedges, and a variety of putters. This is all because a golf match such as foursome includes more than two players, so the pressure can be high at times. In order to perform well, you need a variety of golf clubs, because it’s about creating a perfect combination to make space for the best golf clubs in your toolbox.

Do you have your pair of golf clubs?

If you want to see more posts on our site, please visit our blog.

Milan is an enthusiastic and detail-driven entrepreneur skilled in various fields of online business such as copywriting, SEO, affiliate marketing, and more. With 2 years of experience doing what he does professionally in an agency setting, he has the know-how and vision to get you where you want to be online.