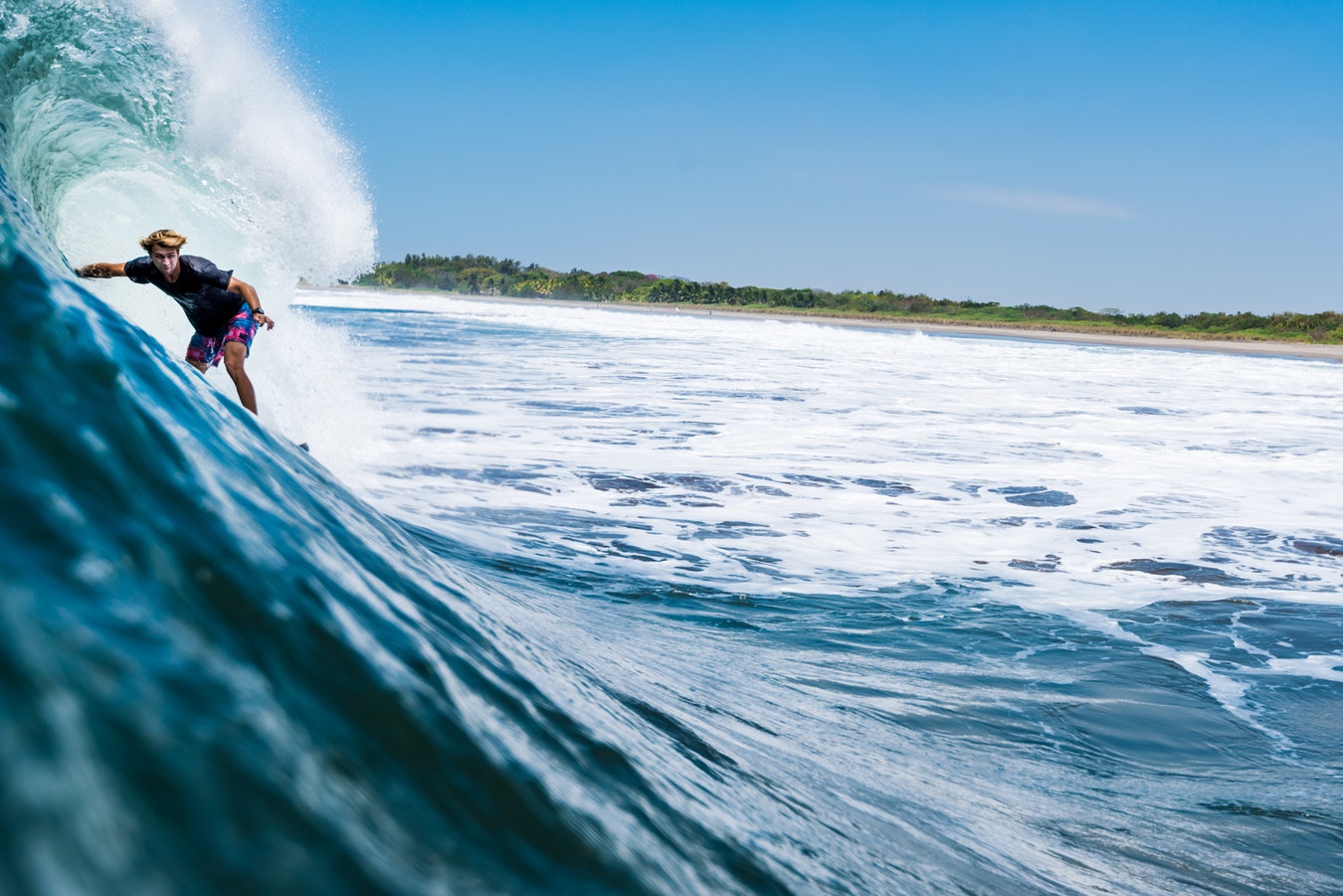 Ozaki 8 is a list of extreme sports endeavors that honor the forces and wonders of nature. It was introduced by the movie Point Break as a fictional set of extreme challenges that occur in various stunning locations worldwide. The list is named after Ono Ozaki, a fictional eco-warrior.

Funnily enough, this list seems to have outlived the movie as well, sparking much more attention to this day. The proposition is tempting, to say the least: be in harmony with nature, travel the world, and experience the utter thrill.  Before you hit the road, though, you should know that some of these adventures are record-setting feats that involve a great deal of risk.

The two Point Break Movies (1991 and 2015) have a lot of interesting concepts like gangs of surfers fighting the system and recklessly globetrotting. I really like that they also promote the benefits of doing extreme sports.

Of course, they have their distinctive flavors, but the newer one is particularly intriguing because it features various extreme ordeals around the world. They are a part of the mysterious Ozaki 8 list, which got people thinking— is it real or just a figment of imagination? Well, the short answer is that both things can be considered true.

Namely, this list started as a fictional construct on the big screen. However, after the success of the movie, it caught people’s imagination and transformed into reality. Many have begun preparing for outstanding and mind-boggling stunts. So, the list is now perceived as an embodiment of extreme challenges that invite daredevils to return to Mother Nature’s embrace and reconnect with it.

These are the 8 fabled disciplines:

Let us start with the Emerging Force. This is one of the two ordeals that were not shown in the movie, but we know exactly what kind of adventure it includes. Basically, it is a rafting “excursion” that takes you to treacherous Inga rapids of the Congo River. Now, just like most exploits on this list, this one is incredibly dangerous.

Yes, kayaking is great and all, but Inga Rapids are some of the most perilous and largest river rapids known to mankind. They belong to the infamous class 4 rapids, most of which are in North America. Therefore, if you are not a seasoned veteran, do not even consider wandering there. Take baby steps first and start with whitewater rafting at weekend retreats or something along those lines.

Birth of Sky is a base jumping feat from the highest point in the world— Mt Everest. We do not see it in the movie, but it is definitely something that has been done in practice. That being said, this stunt has been officially recorded only once, when a Russian BASE jumper Valery Rozov made headlines.

Of course, you do not have to climb the highest point of the world and jump of it. One in every 60 BASE jumps ends with death, which is a rather worrisome statistic. So, conquer any mountain for starters and see how you feel after that. Go for a giant like Kilimanjaro if you are well-prepared for an over-15,000-feet thing. The point is this: you should forge your own Ozaki 8 challenges.

Our next ordeal is Life of Water. In Point Break, protagonists surf a massive 60-foot wave on the French Coast and live to tell the tale. How very convenient for them. Yet, make no mistake: this is big wave surfing at its finest and also deadliest. One additional problem for those who would like to try it out is that in those French Polynesia waters, huge waves are not really common.

In fact, they are a result of a rare weather phenomenon that occurs once in a blue moon, usually not more than a few times every decade. The good news, though, is that you can head to other destinations for big wave surfing, such as Nazare in Portugal. Tahiti, Waimea, and Hawaii do the trick as well. It goes without saying that you need surfing lessons first before you attempt taming giant, unruly waves.

This one is an exhilarating wingsuit exploit. The flight shown in the movie made history— it was the first time 5 fliers navigated the narrow ravine is Switzerland, which is simply called “Crack”. So, believe it or not, it was not the CGI you saw on screen. The reason why no one did it before is that it is a very dangerous place to experience in a wingsuit.

Apart from Switzerland, other popular destinations for wingsuit escapades are Norway and France. One piece of advice: you should be aware that jumping in a wingsuit is not for novices. This is something that people with a lot of experience in BASE jumping and skydiving do. They are used to narrowly averting death on a regular basis, something most others tends to avoid.

This one is not your typical ski hill. It requires you to find an unridden line and slope down it like a pro. You also need a helicopter to drop you off somewhere that looks formidable enough. All of this should suggest that it takes an expert snowboarder to complete such trails. I mean, even going out of bounds of a ski resort could prove to be quite tricky for novices.

Not to even mention the extreme example shown in the movie. That is why I would take it slow and easy at first. Fortunately, there are many good heli-skiing spots in North America, Andes, Europe, New Zealand, and certain parts of Asia. See if there is something suitable near you or embark on a globetrotting adventure of your life.

The seventh ordeal is also one of the two that involves Angel Falls, the highest waterfall in the world. As seen in the movie, it dares you to climb a steep cliff face without any safety gear. After you have mastered the six lives on previous ordeals, this one comes at a crucial step, one that takes you to the enlightening summit of your life.

Well, either that, or it becomes the last thing you ever do. Note that indoor climbing walls do not come close to the 3,000-foot cliff of Angel Falls. To do this, you would need decades of rock climbing experience. Only a handful of people, including Dean Porter have done this. Heed their advice should you be inclined to try your luck.

If you want to experience Awakening Earth, then you go on a skydiving adventure and perform sky-to-earth BASE jumping into Caves of Shadows in Mexico. This stunning wonder of nature is the deepest natural cave shaft ever discovered and it is certainly awe-inspiring. It is hard to imagine another place that would do Awakening Earth justice.

You might feel that this is already giving you itchy feet, but you should take a deep breath. Hijacking a plane and then descending into a sunken cave is a sure way to die or end up in a Mexican prison. Therefore, it might be wise to first do some spelunking (caving). Take a tour with a trusted guide. Get to know the deep caverns of the earth and its many corridors.

One of the riskiest on the list is the last test, the Act of Ultimate Trust. It also takes place at the Angel Falls in Venezuela and entails an act of jumping off without the rope. Sounds like a thing someone with a death wish would do, does it not? Bodhi and Johnny Utah survived landing in a raging river below and it is technically possible to replicate the same in reality.

Alas, the chances of surviving are slim at best. There is hardly a way to even prepare for it and the highest recorded cliff jump in history was 193.5 feet. That is to say that if someone was to successfully jump, it would be a groundbreaking event in the history of extreme sports and would earn the crazy daredevil eternal fame.

Stairway to the extreme pantheon

So, the bitter truth is that even professional athletes would have to train for years in order to take on one of the Ozaki ordeals. Paragons like skydiver Felix Baumgartner or BASE jumper Graham Dickson specialize in skills needed to complete them, but lesser mortals have to think twice.

To do the impossible and go through all eight challenges, you would probably have to train your whole life and have a ton of luck on your side. Even limiting yourself to a few ordeals may be unrealistic. And it is not just about physical abilities. One also requires an exceptional level of mental sturdiness and stability.

Despite all the dangers and risks it encompasses, Ozaki 8 deserves our praise and attention. We cannot but admire the beauty of it all. After all, it is more than an adrenaline junkie’s wish list. It represents a philosophy and a way of living that holds great appeal in this day and age, where most people are stuck in the hustle and bustle of urban, concrete jungles.

Well, consider yourself invited to get away from it. The basic rule: give more than you take, but do have fun along the way. These notions may seem easy to get on board with, but rest assured that they are hard to live by. So, do you want to feel the adrenaline rush and utter thrill taking over? Be my guest.

The sky is the limit

From pure fiction to adrenaline-pumping reality, the Ozaki 8 list has come a long way in such a short time. This is rather impressive, but following the footsteps of action heroes could end up with you paying the ultimate price. Thus, do not get ahead of yourself. Pulling off the full 8 would require demigod-like capabilities. So, can you look death in the eye without blinking?

Even if the answer is yes, I would argue to focus on the essence. Devote your life to your own personal growth and well-being, but also the one and only planet earth we inhabit. Feel free to assemble your own Ozaki 8. Let is serve as a source of inspiration, go on to immerse in timeless landmarks, and gaze at the eternal blue sky. Just enjoy without leaving any footprint.