Top 5 Best Defenders at Real Madrid of All Time 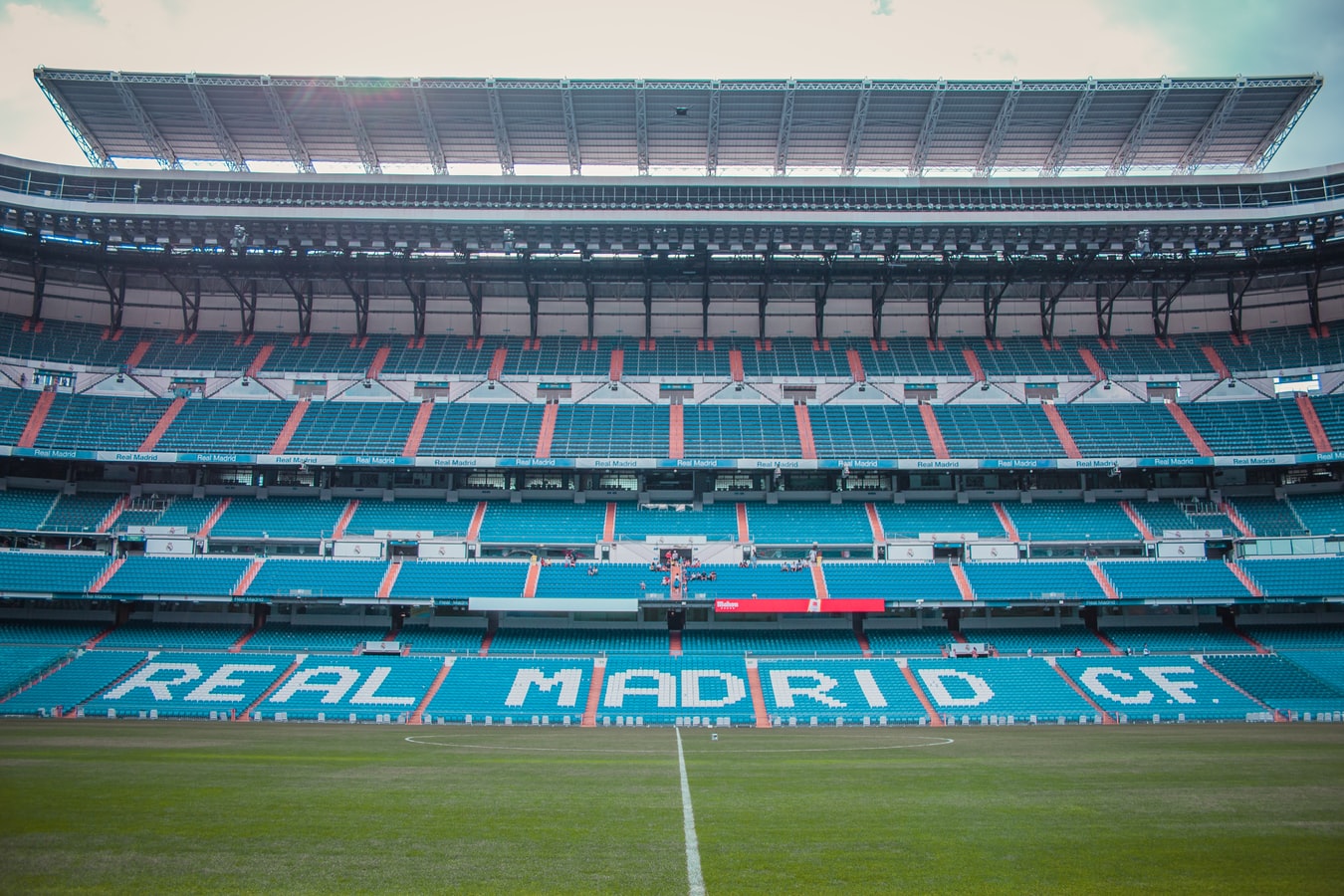 Top 5 Best Defenders at Real Madrid of All Time

Real Madrid is where legends and superstars gather and play the most beautiful football. They do not only have the best strikers in the world, such as Zinédine Zidane, Raúl, David Beckham, and Cristiano Ronaldo, but also have the strongest defenders.
In this article, you will know more about the stronghold in front of Real Madrid’s goalkeepers. They are all the best defenders in the football world. Let’s see the top 5 greatest defenders at Real Madrid of all time.

The Spanish defender soon showed his excellent skills and ability in Sevilla before he moved to Real Madrid with a high-record transfer fee for a young player. Nevertheless, he’s worth every cent of the contract.
Ramos started his career in the side back position, but it was not until in Real Madrid that he flourished to be the best center-back in the world. He is a tough, durable, and fast defender in both Spain national team and Real Madrid. Undoubtedly, Ramos shows his biggest love for Real Madrid.

He plays enthusiastically and passionately. Sometimes, he’s got hot-headed and makes hard fouls to opponents, which is often the critic topic in the newspaper. Above all, his true love is Real Madrid, as he has been through ups and downs with the club. He always shows up at the right place and the right time to save obvious goals for the home team, or even score the decisive winning goals.
After continuous outstanding performances since 2005, Ramos has received an honor to be the captain of Real Madrid. His character is excellent and qualified. All teammates and colleagues also respect him. He’s one of the best captains in the Royal football club.
Despite turning to the age of 33, Ramos doesn’t show any sign of declination or crisis. He’s got a title collection that everyone should dream of: 4 La Liga titles, 4 Champions League trophies, 2 Copa del Rey Cups, 1 World Cup, and many other big, small medals.

It was not until at the age of 28 that the Uruguayan defender joined Real Madrid and ended up his career here. This was also the period when the Royal football team was on top of the world. They featured the “galacticos” superstars such as Francisco Gento, Alfredo di Stefano, Hector Rial, and Ferenc Puskas.
His joining was crucial as Real Madrid won the double: La Liga title and European Cup during the first season of Uruguayan. He also appeared for the club 34 times in the La Liga league and European Cup tournament.
But we cannot dismiss the significance of the defensive line. José Santamaría showed his immediate impact in the first season of Real Madrid. He got enormous stamina, and a durable body as people often called him “The Wall”. He was also good at choosing the right positions and stopping the attack directions. His header was excellent, thanks to his height.
José Santamaría became a legend after ten years serving for Real Marid. He played for 337 matches in total and had won many trophies: five La Liga titles, four European Cups trophies, one Spanish Cup trophy, and many other clubs and personal titles. 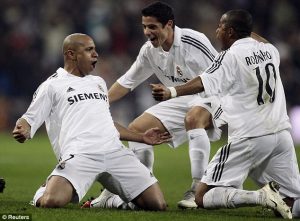 The Brazilian football player was not a striker, but his free-kicks were iconic and exceptional. So what was his primary position? Joining Real Madrid in 1996, Roberto Carlos was let to play on left-back though he played as a full-back in early career. And the left-foot legend was born.
While other defenders were famous for a healthy body and competitive ability, Roberto Carlos was well-known for these special free-kicks. He got a “metal” and dominant left foot, which could do marvelous things from way outside the penalty box. His stunning thunder kicks were the nightmare of every goalkeeper in the world.

Captain Roberto Carlos celebrating with teammates
Roberto joined the “Galacticos” under the first tenure of club’s president Florentino Pérez, played alongside Zidane, Ronaldo, David Beckham, etc. He was a foreigner who appeared 370 times in La Liga, which was the record-breaking of the previous one held by Alfredo Di Stéfano (with 329 times in total). He was also considered the greatest left-back of all time in the world.
After eleven years serving for the Royal football club, Roberto Carlos became a legend with numerous big and small titles, trophies. He won four La Liga titles, three European Cups, two Intercontinental Cups, and three Spanish Super Cups. He was also named as one of the greatest captains alongside Raul and Guti.

This Spanish football player was also called “Chendo” as his nickname. He was a symbol of loyalty due to his unstopped contribution and serving for Real Madrid. He started and ended his career in the Royal football club for seventeen seasons, went through all ups and downs with the club.
Chendo joined Real Madrid at the age of 15, but it was not until his fourth year that he was in the starter line. In this season, Real Madrid won one European Cup and one Spanish League Cup but finished La Liga at 11th position, which was far behind Barcelona. However, this was still a successful beginning of Chendo in the starter formation.
Miguel Porlán Noguera got 497 total appearances for Real Madrid, won one European Cup, two UEFA Cups, seven La Liga titles, two Spanish Cups, four Spanish Super Cups, and one Spanish League Cup. This was a deserving achievement for Chendo after seventeen years contributing to the success of the club.

This Spanish man should be the most special defender in the world. Why? Because he scored more goals than many other strikers. With 127 goals after 601 matches, Fernando Hierro was extraordinary and perfect.
Often, this Spanish defender could play full-back or defensive midfielder. He was good at passing the ball with very high accuracy. He was also hard to crossover because of his firm and durable body.

Above is the list of top five best defenders of all time in Real Madrid. As you can see, the Royal football club doesn’t only have a fantastic attack line, but also featured the most excellent defenders in the world.